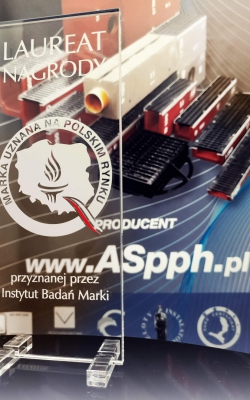 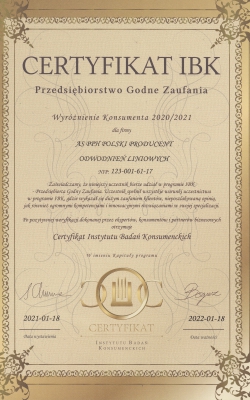 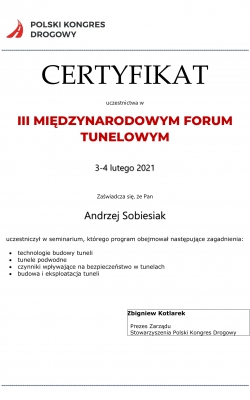 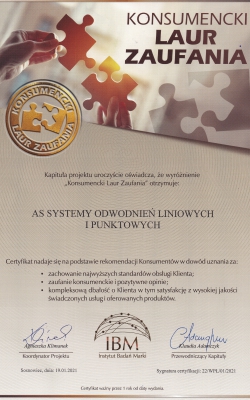 Consumer Laurel of Trust "Aware of the multitude of opinions available on the Internet and their different credibility, a unique award for entities enjoying the highest consumer trust was introduced on the Polish market. Granted on the recommendation of the clients themselves, it is a particularly honorable distinction for Polish enterprises and public entities - it is an honorary confirmation of this, that they met their expectations in terms of the quality of products and services or in relation to the applied standards of customer service. " 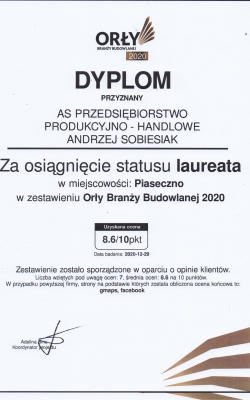 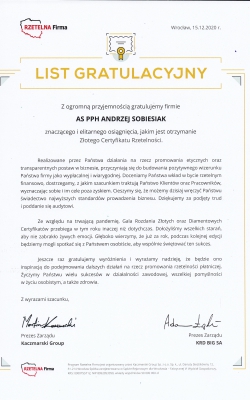 Reliable company (Rzetelna Firma) AS PPH is the winner of another award! On December 15, we received the Golden Certificate of Payment Reliability awarded to participants of the Rzetelna Firma program. Unfortunately, due to this year's unusual circumstances, we were unable to attend the awards gala in person. 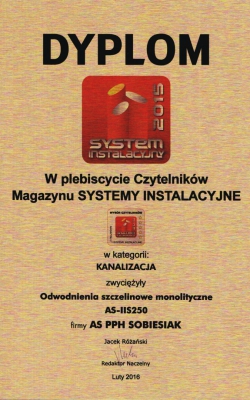 INSTALLATION SYSTEM 2015 In 2016, AS PPH won the 10th edition of the magazine's plebiscite - INSTALLATION SYSTEMS in the "Sewerage" category. Readers of SYSTEMY INSTALACYJNE magazine chose the best installation products of the year in 9 categories, where 59 products competed. The editorial staff received a total of 5,031 votes for 1 388 competition cards. The product exhibited by our company in the competition was the AS-IIS250 Monolithic Slot Drainage, which received over 50% of the votes of the magazine readers. 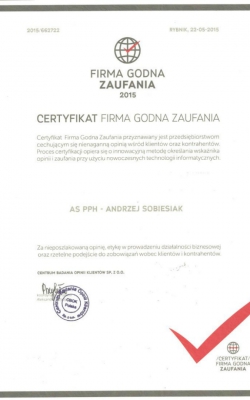 The Trustworthy Company certificate 2015 A certificate granted for an unblemished reputation, ethics in conducting business activities, and a reliable approach to obligations towards clients and contractors. The Trustworthy Company certificate is awarded to entrepreneurs who have an impeccable reputation among customers and contractors. The certification process is based on an innovative method of determining the opinion and trust index using modern information technologies. 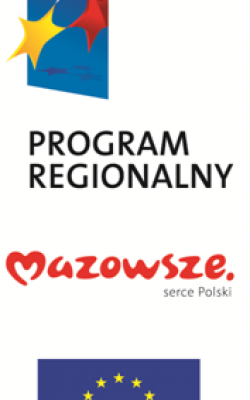 INCREASE OF COMPETITIVENESS OF "AS PPH" COMPANY 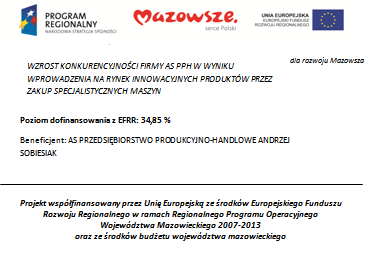 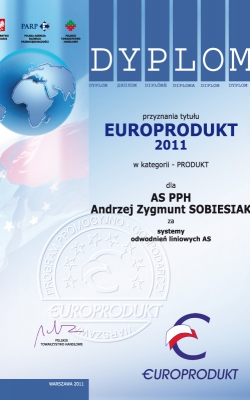 Europroduct 2011 The AS PPH company received the 2011 Europrodukt award In the ‘Product’ category for its linear drainage systems. The main aim of the Europrodukt contest is to promote Polish exports and to raise the profile of Polish enterprises on European markets. The Europrodukt award is granted to products that can compete in terms of high quality and modern technology with those manufactured by other European producers. The contest is supported by the Ministry of the Economy and the Polish Agency for Enterprise Development.

Golden Installer 2010 In 2011 the Polish Corporation of Sanitary Heating, Gas and Air-Conditioning Techniques and the publishers of “Polski Instalator” monthly awarded AS PPH the title of Golden Installer in the 2010 Golden Installer for Top Enterprises competition. The reason for granting this prestigious distinction was developing and implementing the production of AS linear drainage systems using company’s own modern technology. 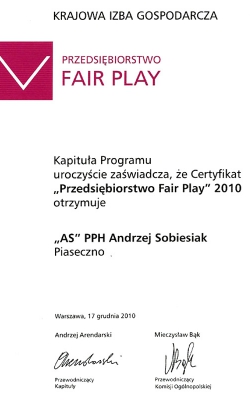 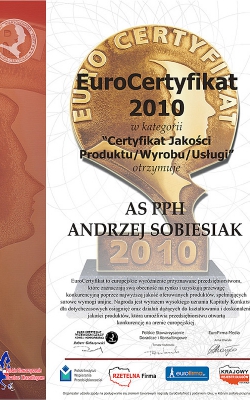 Eurocertyfikat (Eurocertificate) The AS PPH company, a Polish producer of linear and point drainage systems, was awarded the 2010 Eurocertificate in the Product/Service Quality category. Eurocertificate is a European distinction granted to enterprises that made their mark on the market and win a competitive advantage by providing products of highest quality that conform with EU’s strict requirements. The award confirms the Chapter’s high recognition for the company’s achievements and activities aimed at creating and improving the product quality which renders it possible for the company to compete on European markets. 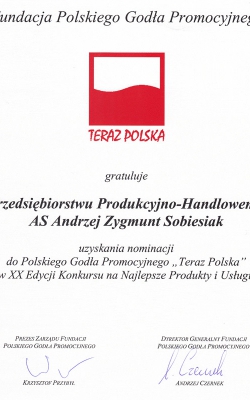 Teraz Polska (Poland:Now) The Polish Promotional Programme Foundation granted the AS PPH company and its owner, Andrzej Zygmunt Sobiesiak, a nomination for the Poland:Now Emblem in the 20th Contest for Top Producers and Services. The high evaluation by the panel of experts and the nomination granted confirm that the company’s product met all the requirements of the Poland:Now contest. 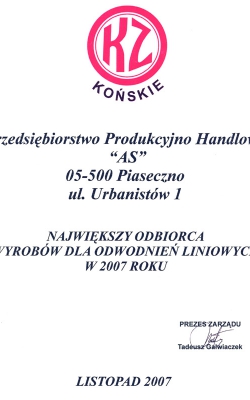